One of the strongest aspects of the Savannah River Section is our extensive community outreach and public education programs. Not including the monthly technical meetings, the section hosts on average one outreach event every 3 weeks, with our busiest season tending to be January-April.  Check out some of our recent activities below. 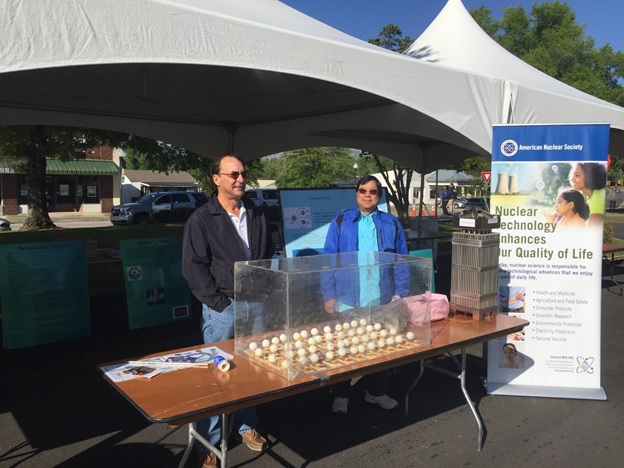 The trio talked to approximately 100 students and their parents. One particular young student, a 7th grader, was especially interested in nuclear science and biology. She and her mother asked where she might go to get more information. ANS-SR recommended the ANS web site and USC Aiken summer programs. She later brought a classmate over to hear the radiation basics presentation again. 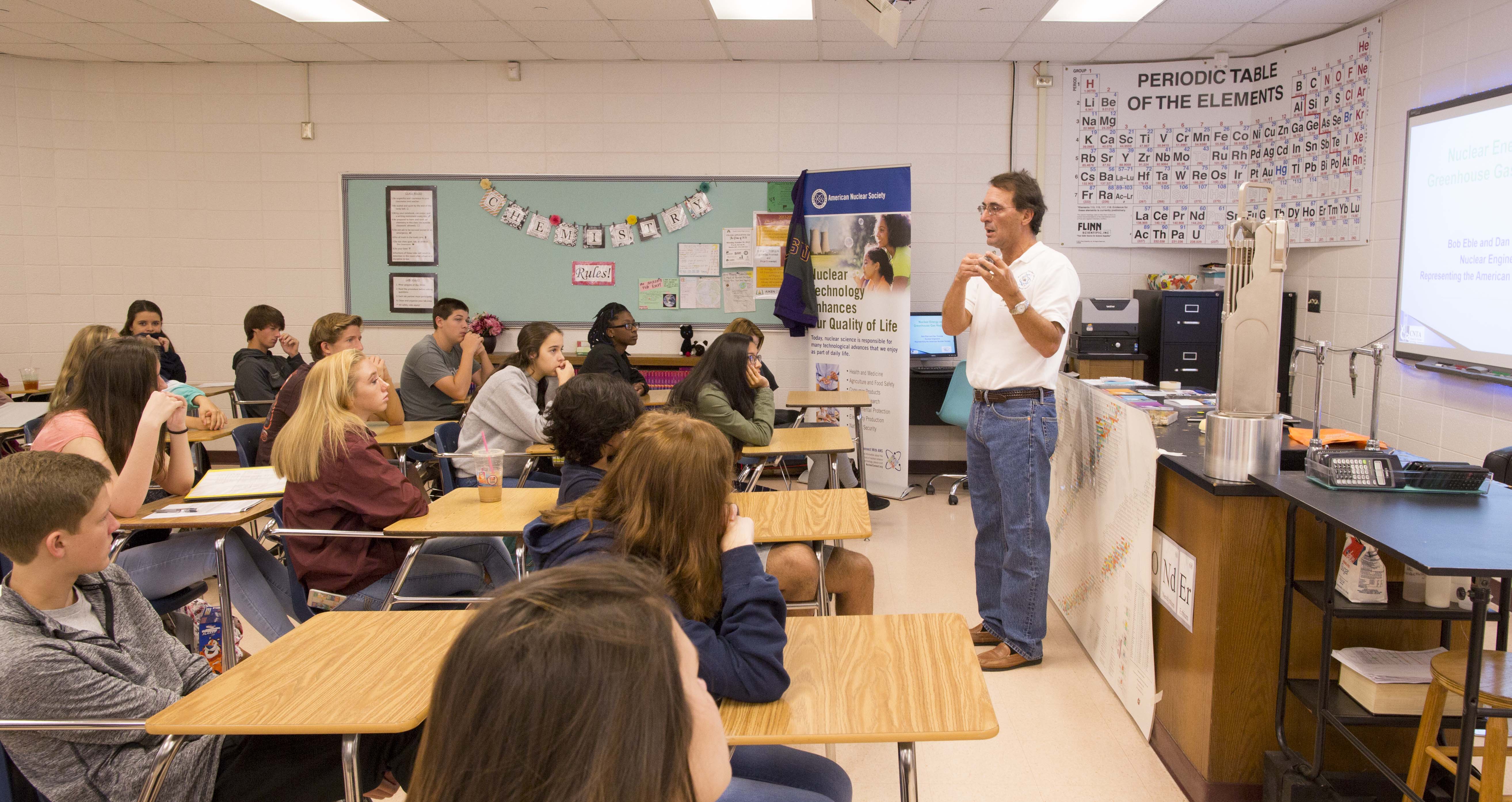 The Nuclear Blitz is over and we had great success. ANS-SR and Areva supported 13 classroom sessions and the atoms in the alley presentation. Dan Thomas and Bob Eble made 5 presentations to about 150 students in the advanced and honors chemistry classes of Ms Poppy and Mr. Overholser at South Aiken HS on Tuesday. Dan and Bob traveled to Augusta University on Wednesday to make presentations to 3 high school students from Aiken County Career & Technology Center, Technical Career Magnet School and Richmond County School System. About 75 students total.

ANS-SR also attended the Teller Lecture on Thursday October 19 with guest speaker James Conca, Science Contributor to Forbes on Energy and Nuclear Issues. On Friday October 20 Michael Fendler and James Mercer (Southern Company) made 5 presentations to students from North Augusta HS. On Saturday October 21 evening Dan and Bob attended the Atoms in the Alley event. They presented naturally occurring isotopes and gave out helium filled balloons and candy to the students. They talked to about 50 students and their parents. 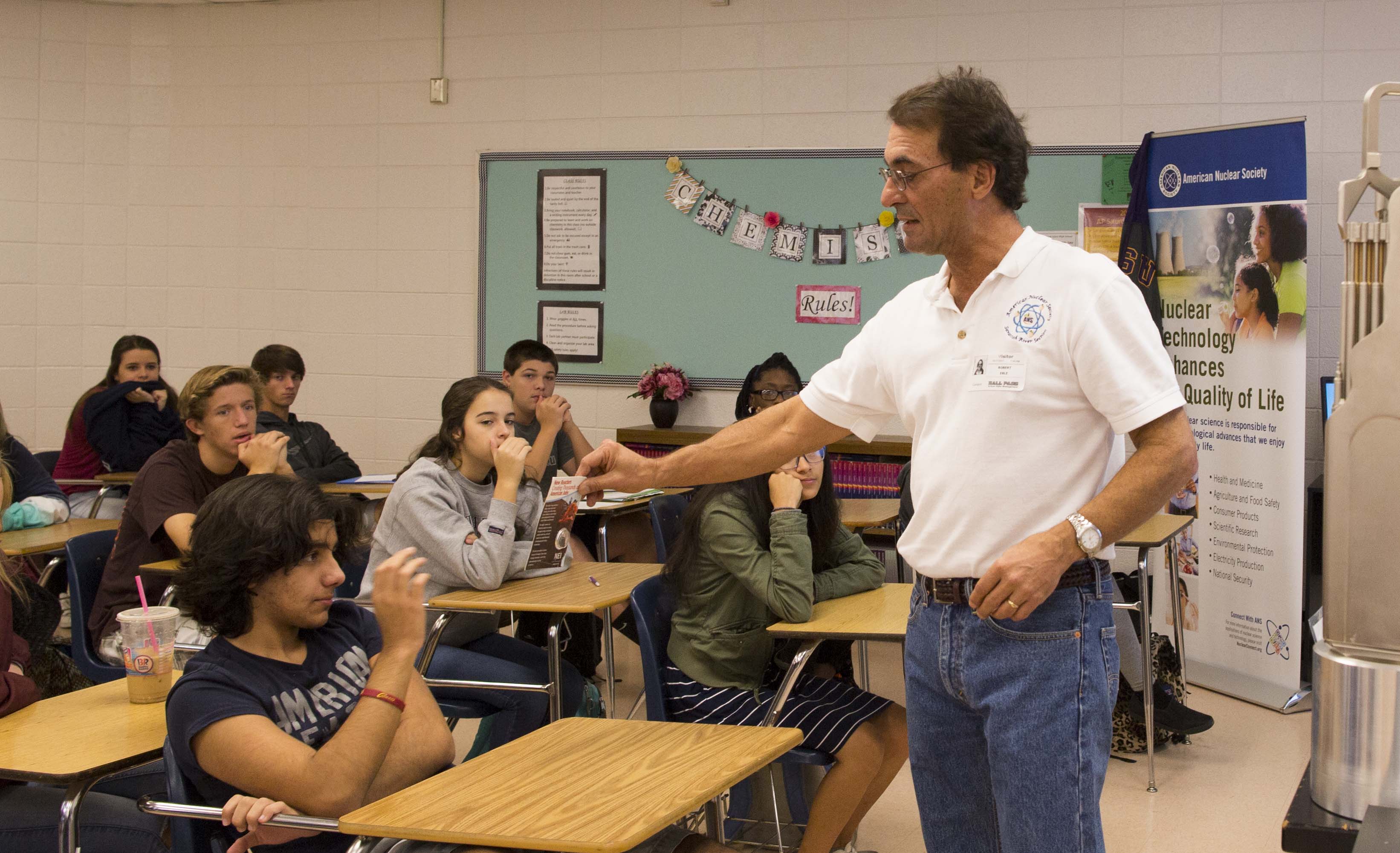 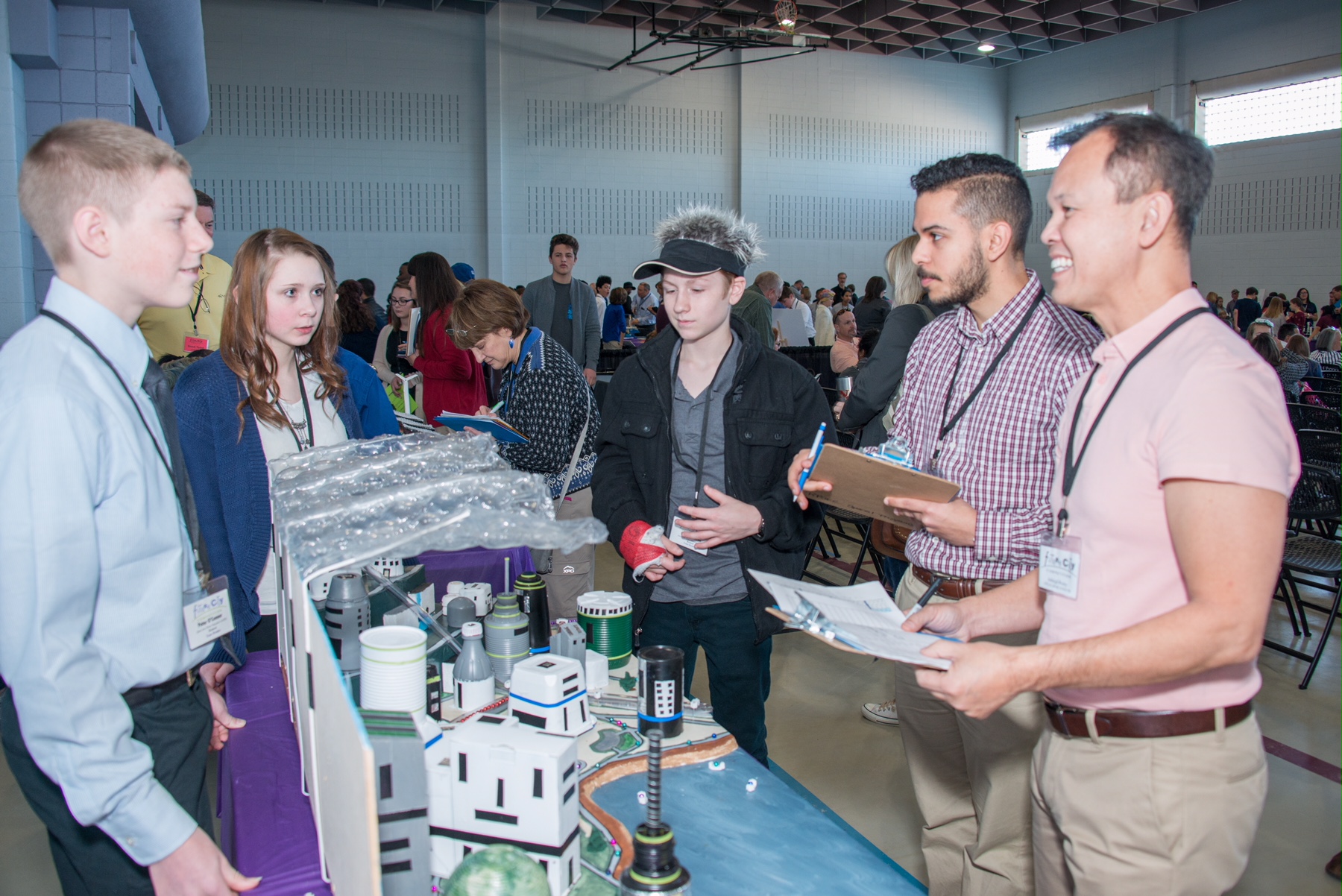 On January 20, 2018, a group of ANS Savannah River volunteers had the honor of being judges at the 2018 Future City regional competition held at the University of South Carolina Aiken. Future City is a project-based learning program for 6th, 7th, and 8th graders. The students imagine, research, design, and build models of the city of the future. The national competition is held early each spring and is in its 25th year! The competition is supported by numerous industries, engineering companies, and professional organizations like ours. Their mission – build a better tomorrow by inspiring people today. The ANS-SR judges also had the privilege of presenting the Best Energy System award. 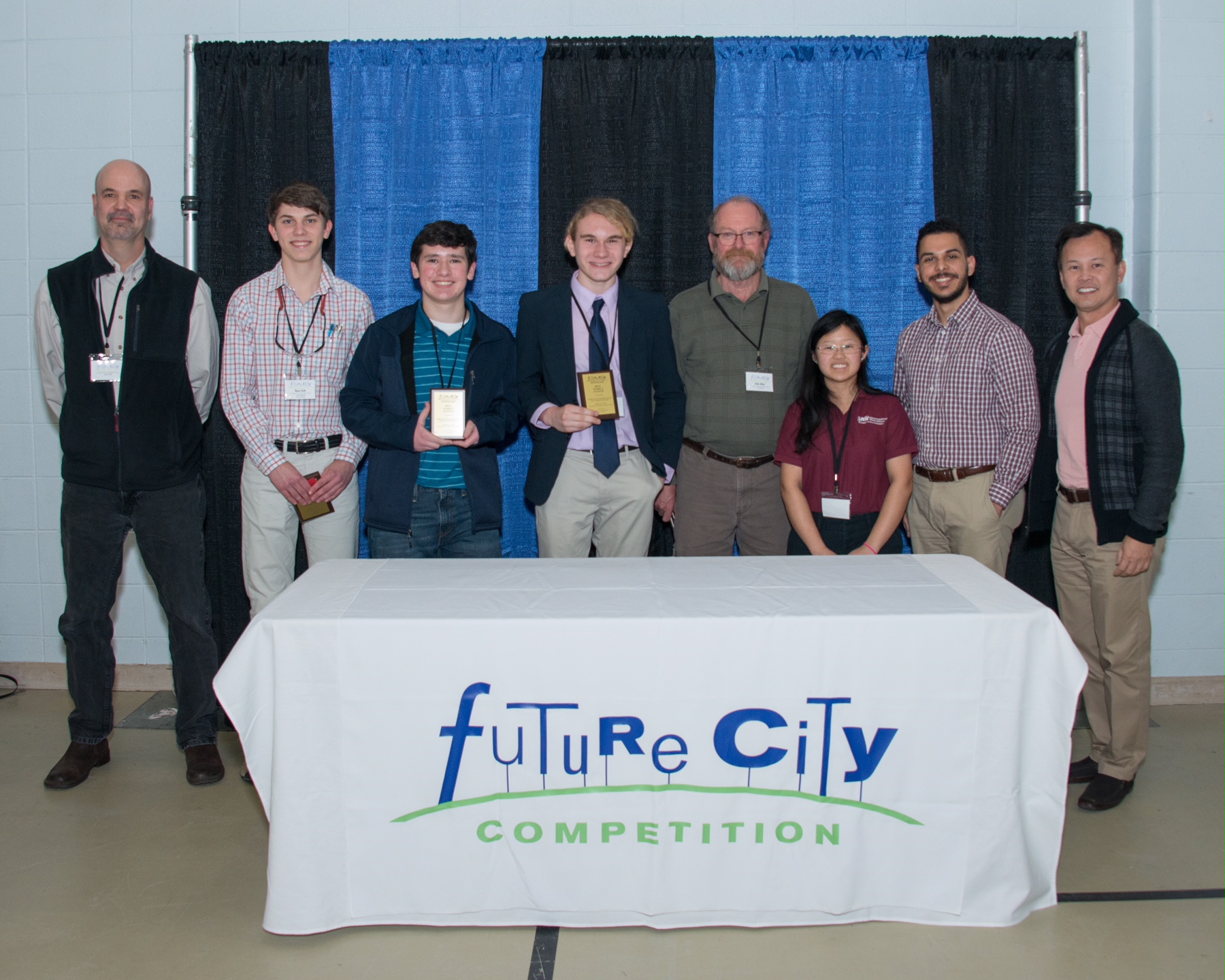 From the Augusta Chronicle: The CSRA College Night took place Thursday at the James Brown Arena from 5 to 8:30 p.m.College Night gives students, parents and guidance counselors an opportunity to learn about education opportunities available from accredited colleges and universities. Representatives from over 140 engineering and liberal arts colleges and universities are expected to attend. Professional and technical societies will also be in attendance. The evening concludes with drawings for scholarships. 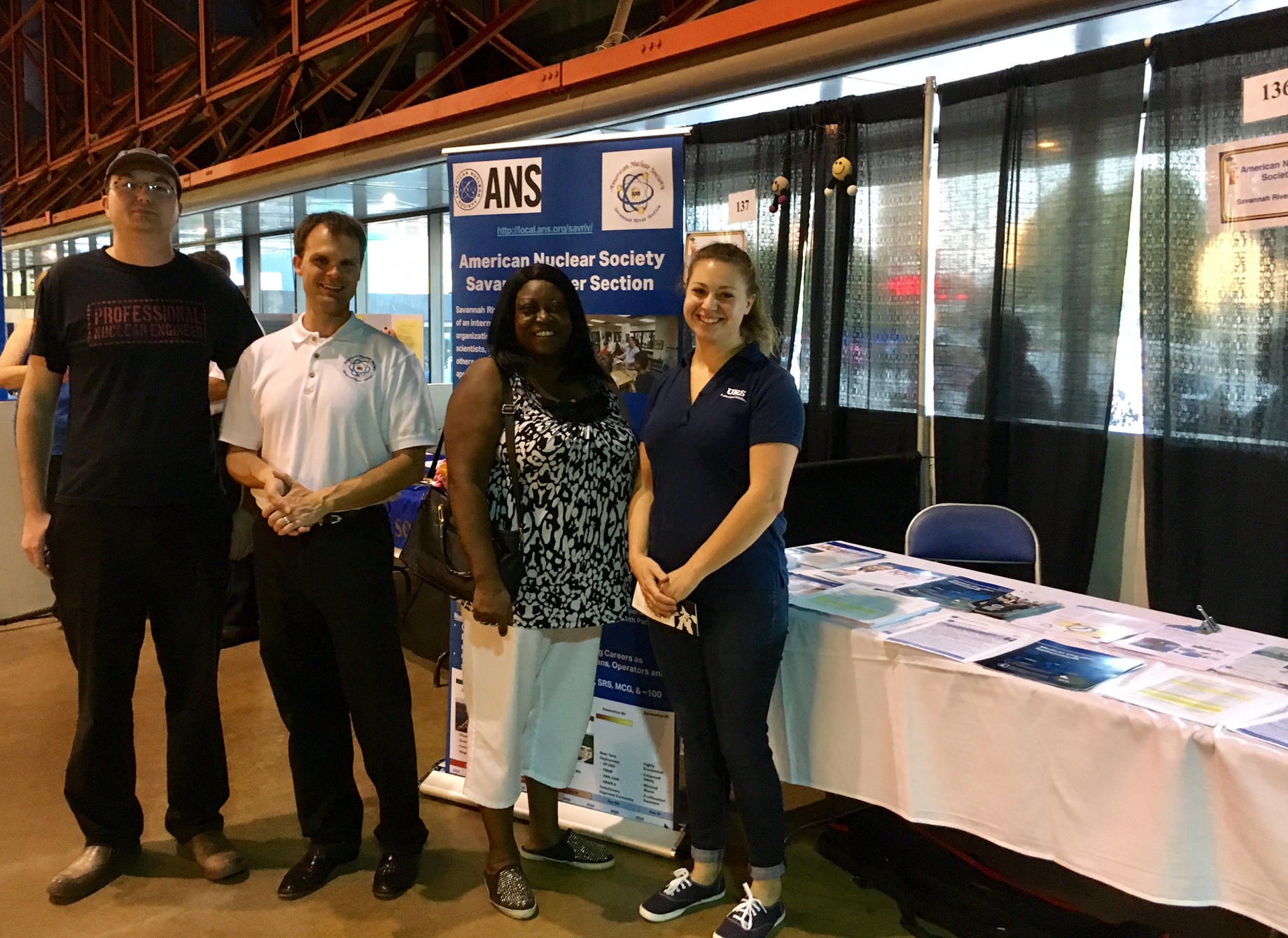 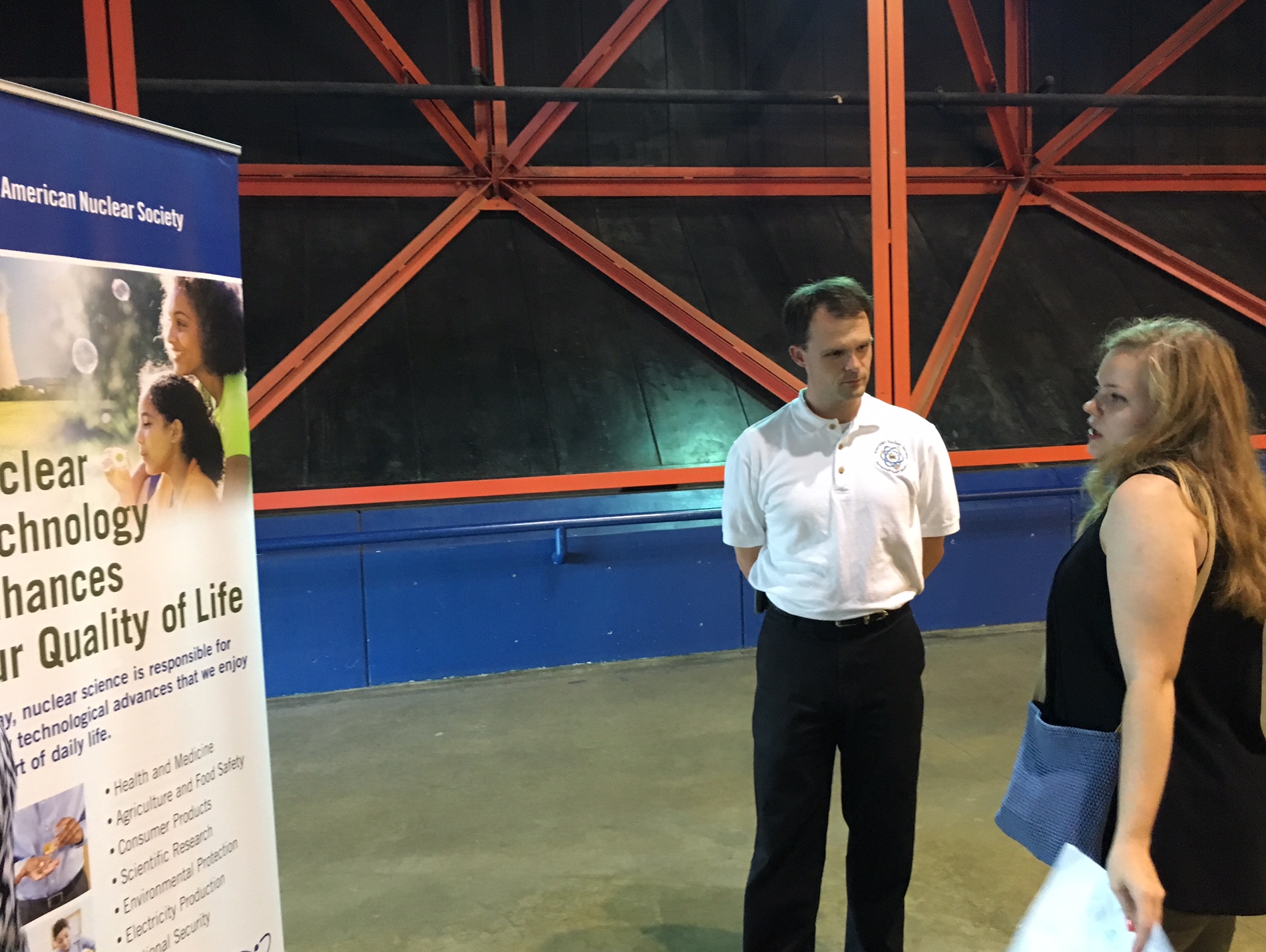 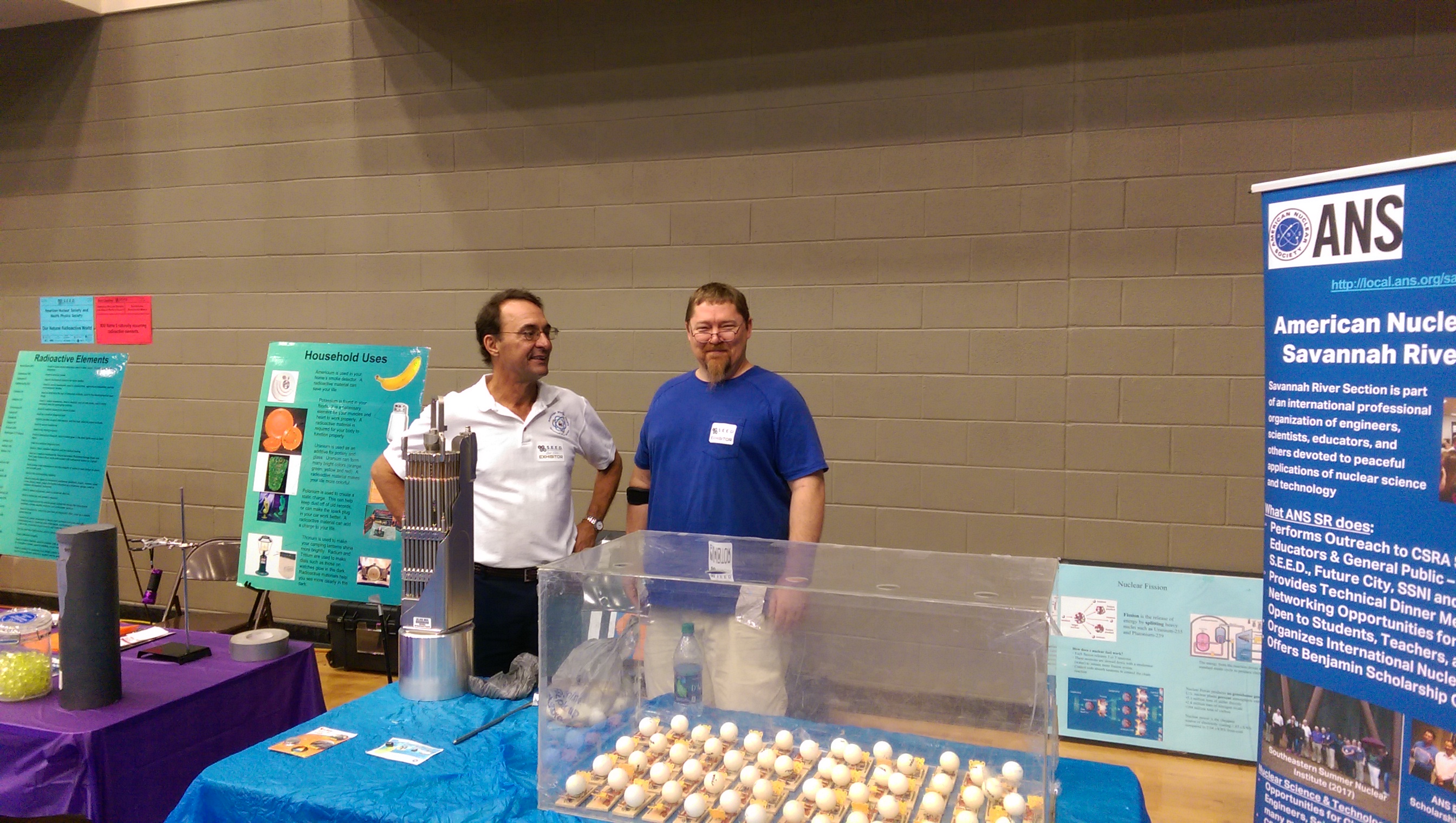 ANS-SR had 3 tables going for most of the day. The fission chamber handled by Dan Thomas and Fred Pilot. The naturally occurring radioisotopes, detector and shielding; and the balloon nuclei and chart of the nuclides. ANS-SR spoke to over 300 students and family members.

All went well except when Bob Eble tried to help Fred with the fission chamber and set it off with the top open. That always gets the crowd excited when they see ping pong balls flying across the gym.

There were several memorable moments like when Bob Eble handled a young girl one of the helium balloons. She obviously had never done this before because she held it loosely from the bottom and after one little giggle, it took off. She looked so depressed. Her Dad smiled. Bob reassured her that he would fill another balloon for her and the one lost would come back down. She held on to the next one.  Lesson learned.

Trying to tie 14 balloons together took about ½ hour. The smaller balloons were harder than the bigger ones. In addition, the smaller ones did not float so we tried to fill them to the max making them harder to tie together. We will get better the next time. 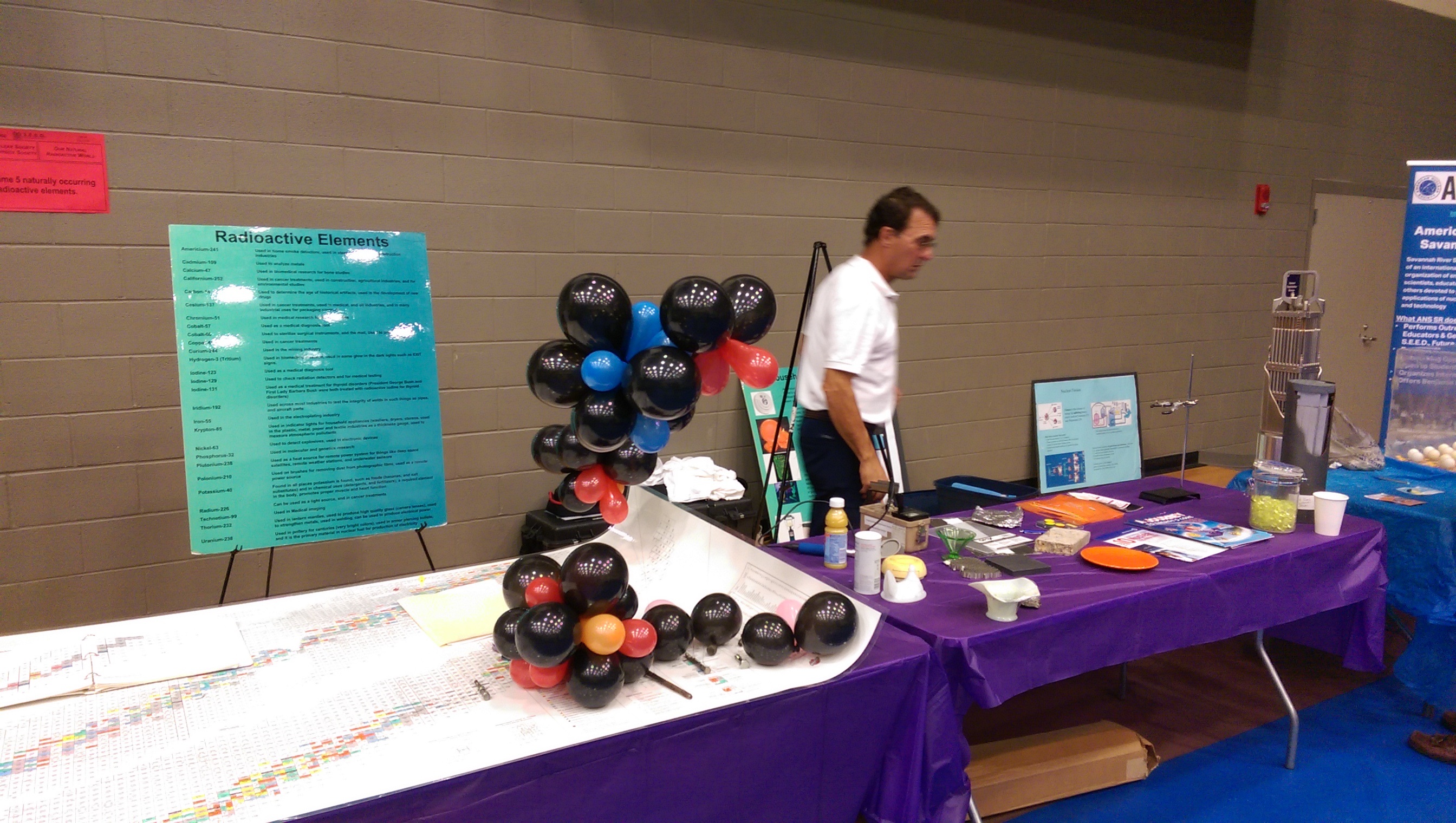