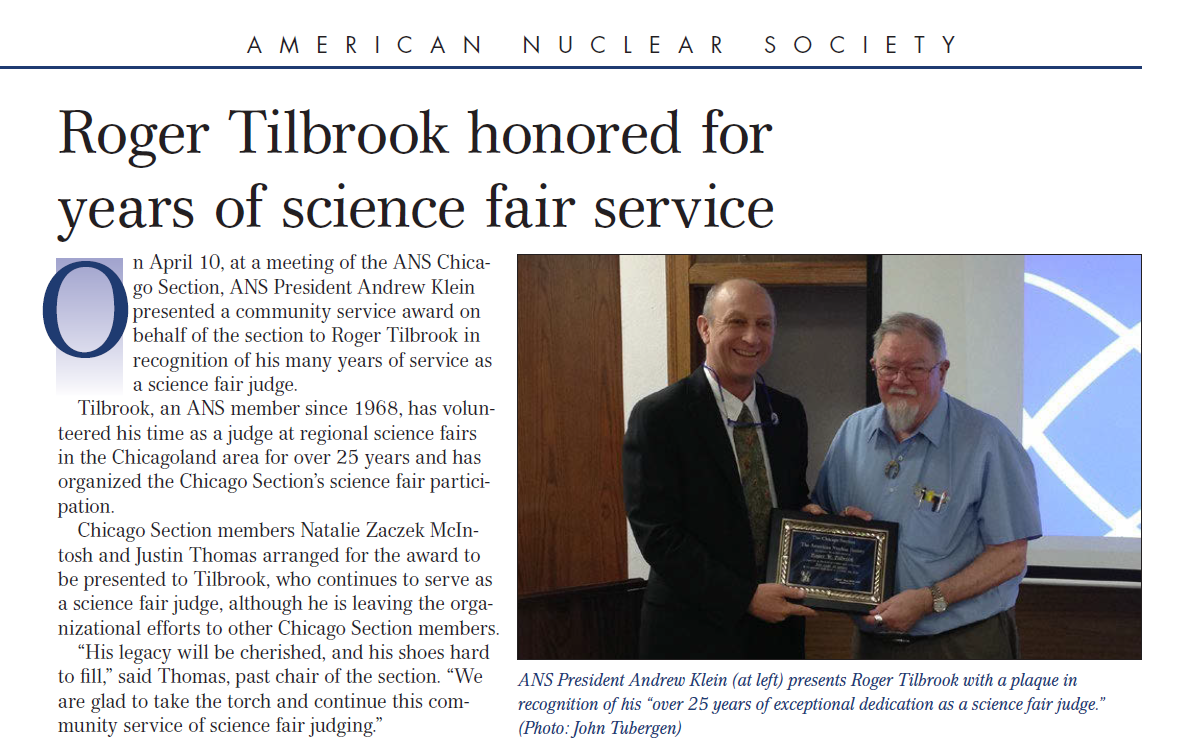 ANS-Chicago presented Roger Tilbrook with a Distinguished Service Award in April, 2017. Roger Tilbrook has impressively been a science fair judge in the Chicagoland area and for the state for over 25 years. Through ANS-Chicago, he continues to provide inspiration and financial rewards to those students who show critical thinking skills in the field of science and technology.

ANS National president Andrew Klein presented this Distinguished Service award to Roger on behalf of ANS-Chicago on April 10, 2017 at the ANS headquarters in LaGrange, IL, resembling the paper awards he has given out for decades. It read: The Chicago Section of the American Nuclear Society recognizes the achievement of Roger W. Tilbrook as superior in the field of science and technology for over 25 years of exceptional dedication as a science fair judge. ANS News covered this award as shown in the image.

This Distinguished Service Award is a unique award with no real precedent. ANS-Chicago recognizes Roger’s 25+ years of service & outreach in organizing a special award from ANS-Chicago to students participating in the Illinois Junior Academy of Science (IJAS)’s science fairs. Using 3 simple questions to judge the projects, Roger and volunteers through ANS-Chicago have awarded two cash prizes at each of 6 regional science fairs in the Chicago area, plus the final state competition. The prize includes monetary prizes for first and second place, along with a nuclear-friendly book for the school library (currently Max Carbon’s “Nuclear Energy: Friend or Foe?”). Prizes like these to motivate students into science is highly appreciated by the organizers especially when financial rewards are drying up. As far as we know, Roger created the award, and has been organizing its distribution for at least 25 years. For several of those years he was the sole judge, traveling to all of the regions.

On behalf of ANS-Chicago, Thank you, Roger Tilbrook, for your leadership in community service.