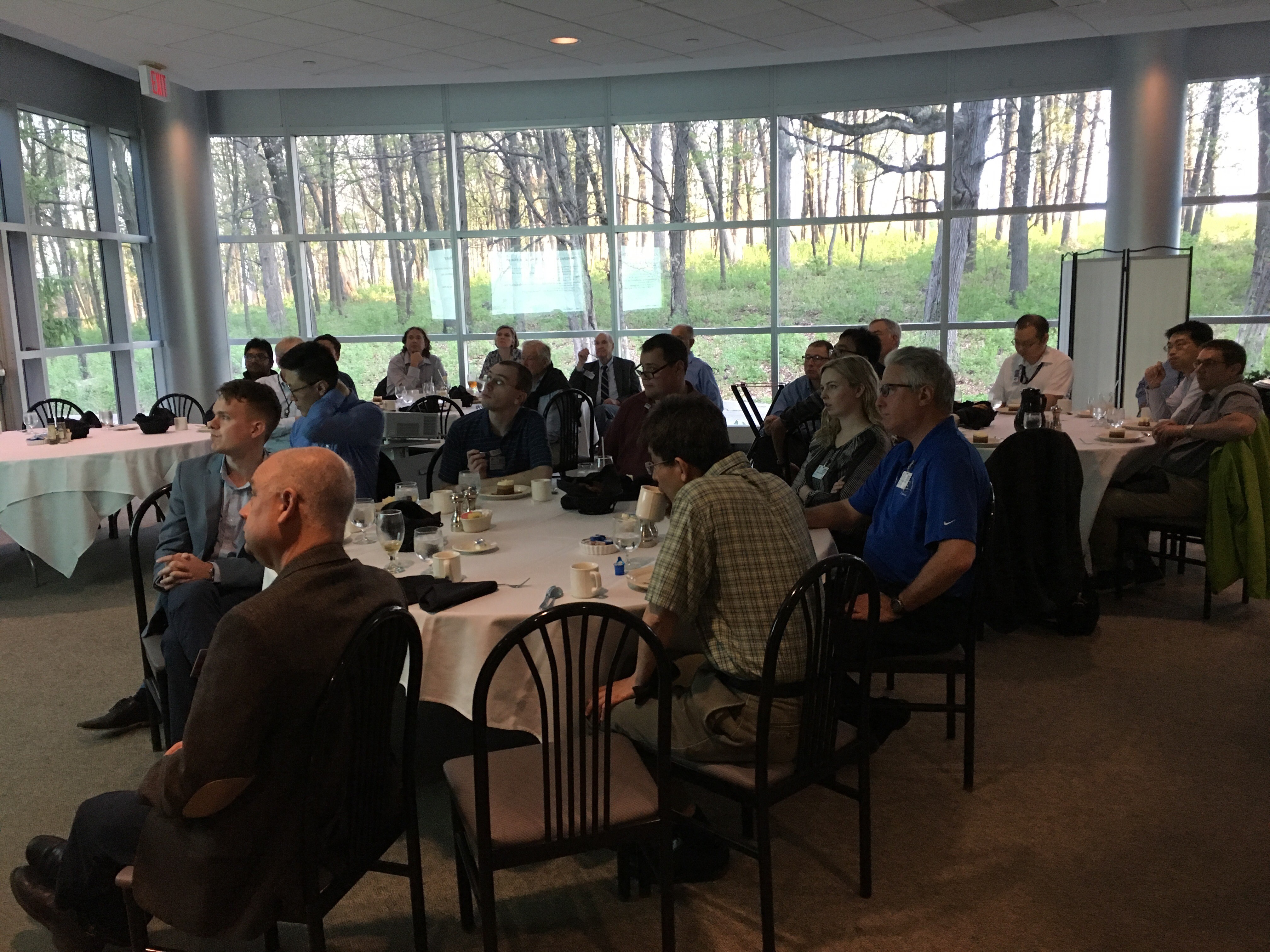 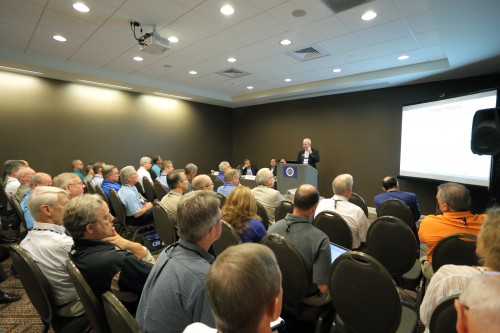 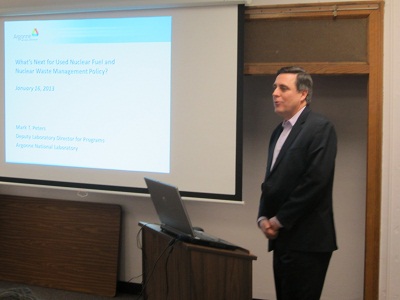 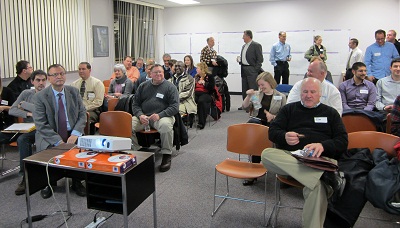 Autonomous Operation of Modular Reactors in the Grid of Tomorrow, 6-19-19

Abstract: The current grid is evolving toward one characterized by large temporal variations in demand caused by high renewable penetration and by the need for run-on-demand generation to displace fossil fuels. A number of innovations will be described to improve the economic performance of advanced reactors to better enable them to compete in the electric grid of tomorrow. These include autonomous monitoring and control technologies to reduce operations and maintenance (O&M) staffing costs below those that exist today. These advances are then synergistically combined with innovative plant design features to achieve greater ramp rates to capture part of the high value reserve market. A general framework for integrating these innovations applicable across all advanced reactor types is being applied to the fluoride-salt-cooled high-temperature reactor (FHR) to demonstrate the achievable improvement in economics

Christopher Young came to the FBI in Chicago as an Intelligence Analyst in January 2018 after retiring from the 5th Weapons of Mass Destruction Civil Support Team, IL Army National Guard. He has worked with weapons of mass destruction and hazardous materials for 20 years, during which time he provided subject matter expertise related to chemical, biological, radioactive and nuclear materials before, during, and after potential WMD terrorist events and worked with a vast array of federal, state, and local agencies to include the FBI Hazardous Evidence Response Team and WMD, US Department of  Energy, US Department of Homeland Security, Illinois State Police Labs, IL Department of Public Health, and Chicago Fire and Police Departments.

RSVP at Survey Monkey or email us at the ‘contact us’ page on this website. First 30 pay only $25, otherwise price is $34. First 10 students free. Please see dinner selection options in the link. Note that Argonne is a secure location and advanced registration is required to obtain a visitor pass.

Abstract: Nuclear energy is facing some difficult challenges as well as numerous opportunities in the years ahead. This presentation will discuss the importance of nuclear energy in meeting global climate change targets, the difficulties experienced by some currently operating plants and some ideas to preserve these important national assets. It will also cover recent advances in advanced reactors, including small modular reactors. It will also briefly include a discussion of a new project by the American Nuclear Society to identify the Nuclear Grand Challenges that would lead to significantly improving the delivery of nuclear science and technology solutions for the betterment of humankind.

Abstract: Exelon is at a pivotal point where the continued operation of two plants, Quad Cities and Clinton, hinges on the legislative decisions of Springfield, IL by the end of May. The timing of this lecture is to provide a real-time snapshot of why these two nuclear plants depend on this legislation based on their economic situation and why May 31st is the deadline.  Quad Cities nuclear power plant is a two unit plant on the border of IL and Iowa and Clinton nuclear power plant is a single unit plant in central IL approx. 40 miles West of University of Illinois at Urbana-Champaign. See also Wall Street Journal Article.

The Future of Neuroscience Research in PET and MRI Imaging by Dr. Keith Allen, DO, CNMT, ARMRIT (MRI) February 23, 2016

Abstract: The future of neuroscience research in PET (Positron Emission Tomography) and MRI (Magnetic Resonance Imaging), the quantum mechanics that explains the operations of the PET and MRI technologies. This will end with a discussion of the Human Connectome Project, a brain mapping project supported by the Obama Administration that will have important implications of the future of neuroscience.

As taken from the ANS program: The NURETH-16 technical program consists of 677 oral and poster presentations  delivered in five full days.  Since the first meeting in 1980, NURETH series meetings are the largest international forums to present and discuss progress and advancement in research, development, and applications of the topics related to nuclear reactor thermal hydraulics and related fields. The NURETH-16 meeting is organized by the Thermal Hydraulics Division (THD) of the American Nuclear Society (ANS) in cooperation with ANS Chicago Local Section along with many other international cosponsoring organizations. NURETH-16 is a continuation of this outstanding NURETH series. It covers a wide range of topics of thermal-hydraulics associated with the different types of nuclear reactors of current and future generations. Almost one thousand (984) abstracts and over 750 draft papers were submitted.

In 2010, PNL created a new company (SHINE Medical Technologies) to utilize its neutron generator technology to produce medical isotopes, such as Mo-99. The SHINE system employs an accelerator-driven LEU solution in a geometry optimized for high-efficiency isotope production.  Neutrons produced via DT fusion reactions in the accelerator target drive fission in the subcritical LEU solution.  The solution is irradiated for approximately a week, then medical isotopes are extracted from the solution.

See the link on ANS Nuclear Café on this meeting: http://ansnuclearcafe.org/2013/01/30/chicago-local-section-welcomes-dr-mark-peters/ and in ANS January 2013 ANS Nuclear News.

Mark Peters, PhD is the deputy director for programs at Argonne National Laboratory

From these articles: “Peters, who is currently serving on the executive committee of ANS’s Fuel Cycle and Waste Management Division, provided an overview of the development, technical achievements, and current state of spent nuclear fuel and high-level waste management in the United States. He spoke about the government’s failure to meet its obligations under the Nuclear Waste Policy Act and reviewed alternatives to geological disposal, including closing the nuclear fuel cycle.”

“The topic could not have been more timely, as the US Department of Energy on Friday, January 9, released a response to the Blue Ribbon Commission on America’s Nuclear Future recommendations on nuclear spent fuel and nuclear waste policy, broadly endorsing the commission’s findings and in effect outlining a new strategy for US nuclear waste disposal.”

“Nuclear Science and Technology: Managing the Global Impact of Economic and Natural Events”

The Role of Scientific Analysis in the Study of Works of Art, 2-21-19

Speaker Bio: Ken Sutherland is the Andrew W. Mellon Conservation Scientist in the Department of Conservation and Science at the Art Institute of Chicago. His research interests concern the characterization of organic materials in works of art, using mass spectrometric and other analytical techniques, to inform an understanding of their technique, condition and appearance. He held previous positions as Scientist in the Conservation Department of the Philadelphia Museum of Art and Research Fellow in the Scientific Research Department of the National Gallery of Art, Washington DC. He holds a Ph.D. in chemistry from the University of Amsterdam, a diploma in the conservation of easel paintings from the Courtauld Institute of Art, London, and a B.Sc. in biochemistry from University College London.